After a few trial runs earlier it was once again time for a proper bikepacking trip. Originally Joe and I had tried to find a weekend where both would be available, but no such luck this time around.

My plan was to bike the Emerald Ribbon http://www.emeraldribbon.no/ starting early on saturday morning and returning back early sunday in time for planned family activities. 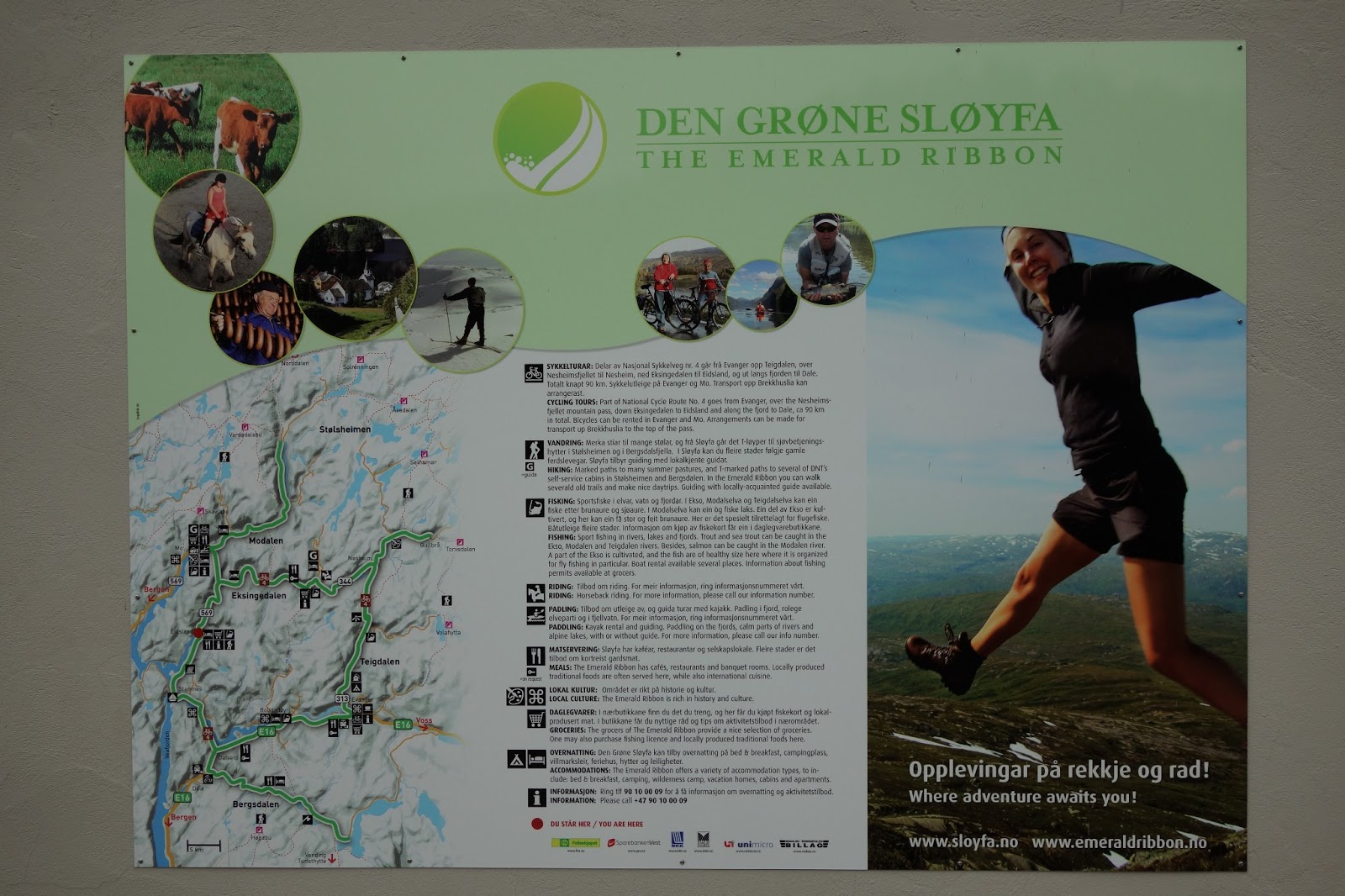 My chosen weekend was also the day when the traditional bikerace from Bergen to Voss takes place and the area  next to Grieghallen was bustling with lycraclad racers, eager to start on the 170 km journey   http://www.bergenck.no/defaultBV.aspx?pageId=206 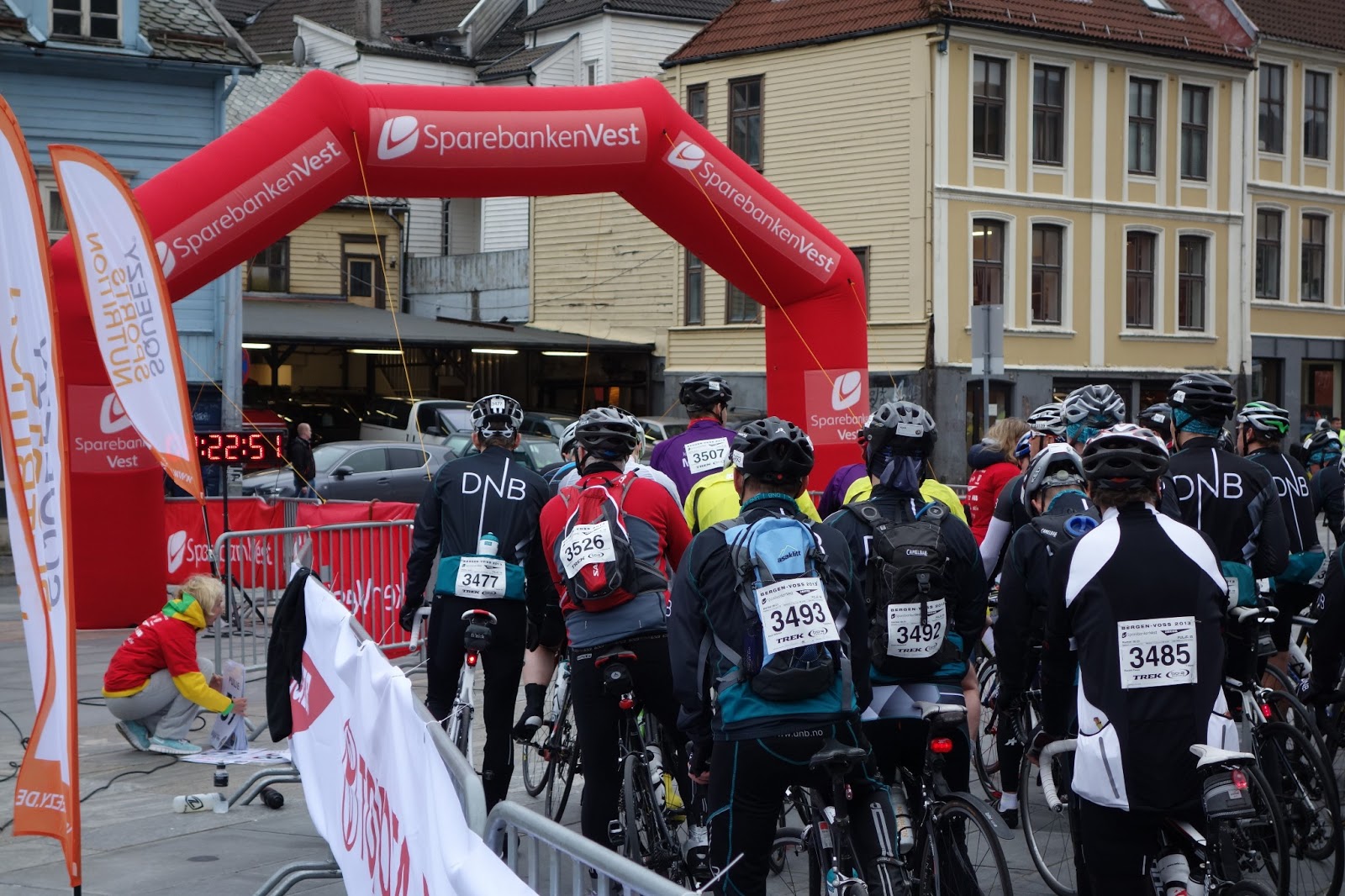 However this years event was marked by a tragic accident with a fatal casualty. A rider somehow fell over the railing in a sharp turn and landed about 50 meters below, on the railroad tracks. Our thoughts go to those  who are left behind.

My railwayjourney was delayed because of this accident, but eventually I ended up at my starting point, Evanger. I made a mental notice to be really careful going downhill on sometimes slippery tarmac.

A few last provisions were bought at the local supermarket and off I went. The route starts off easy enough, winding through meadows and small forests for a few kilometres, before the big climb starts. A german registered car drove past me with two river kayaks on the roof, and I saw them again next to a big waterfall.. They were suiting up and from the looks of it were going to do a drop in that 20-30 meter waterfall. Not my cup of tea, but the river further downstream looked nice for packrafting.- 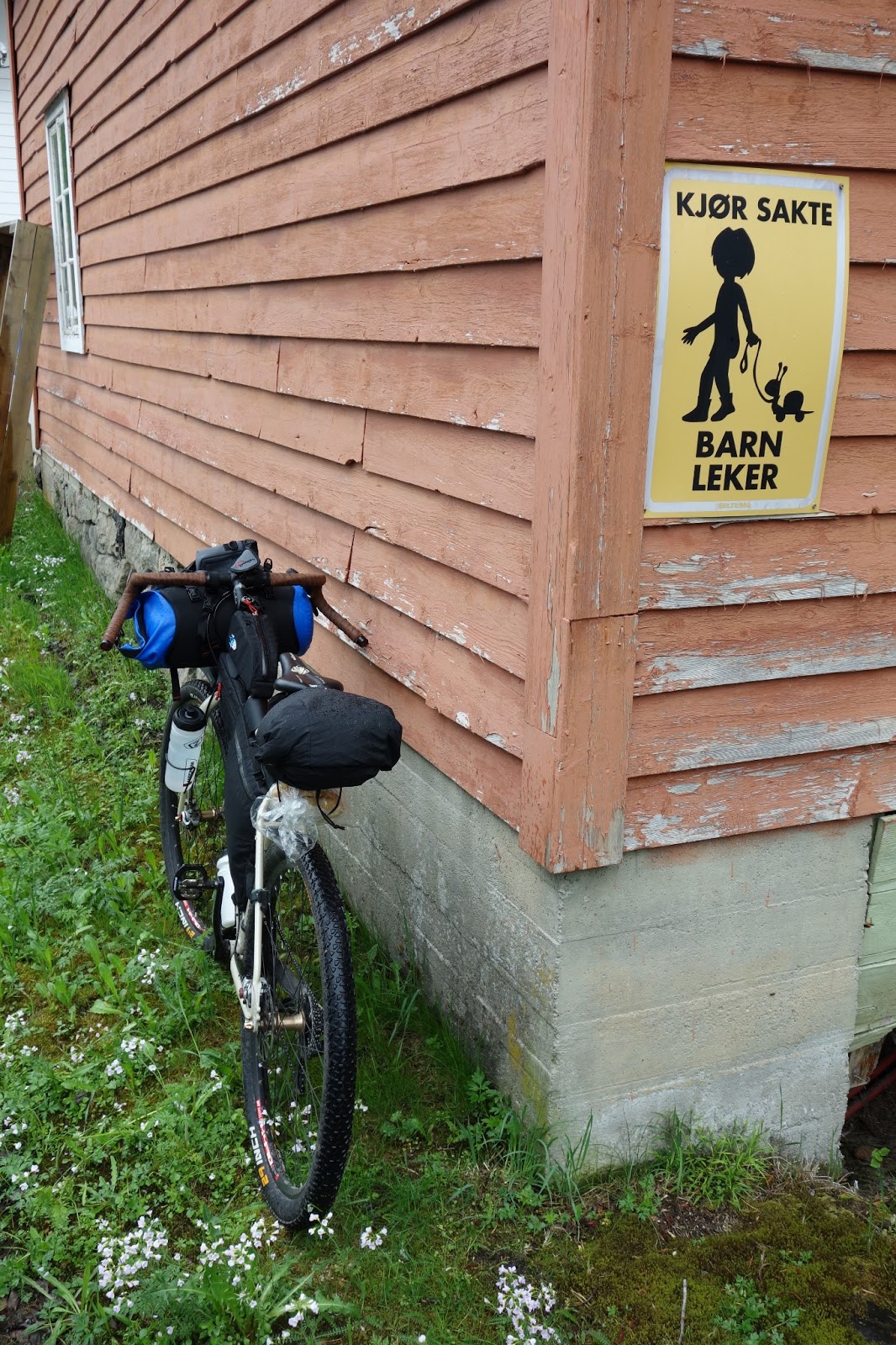 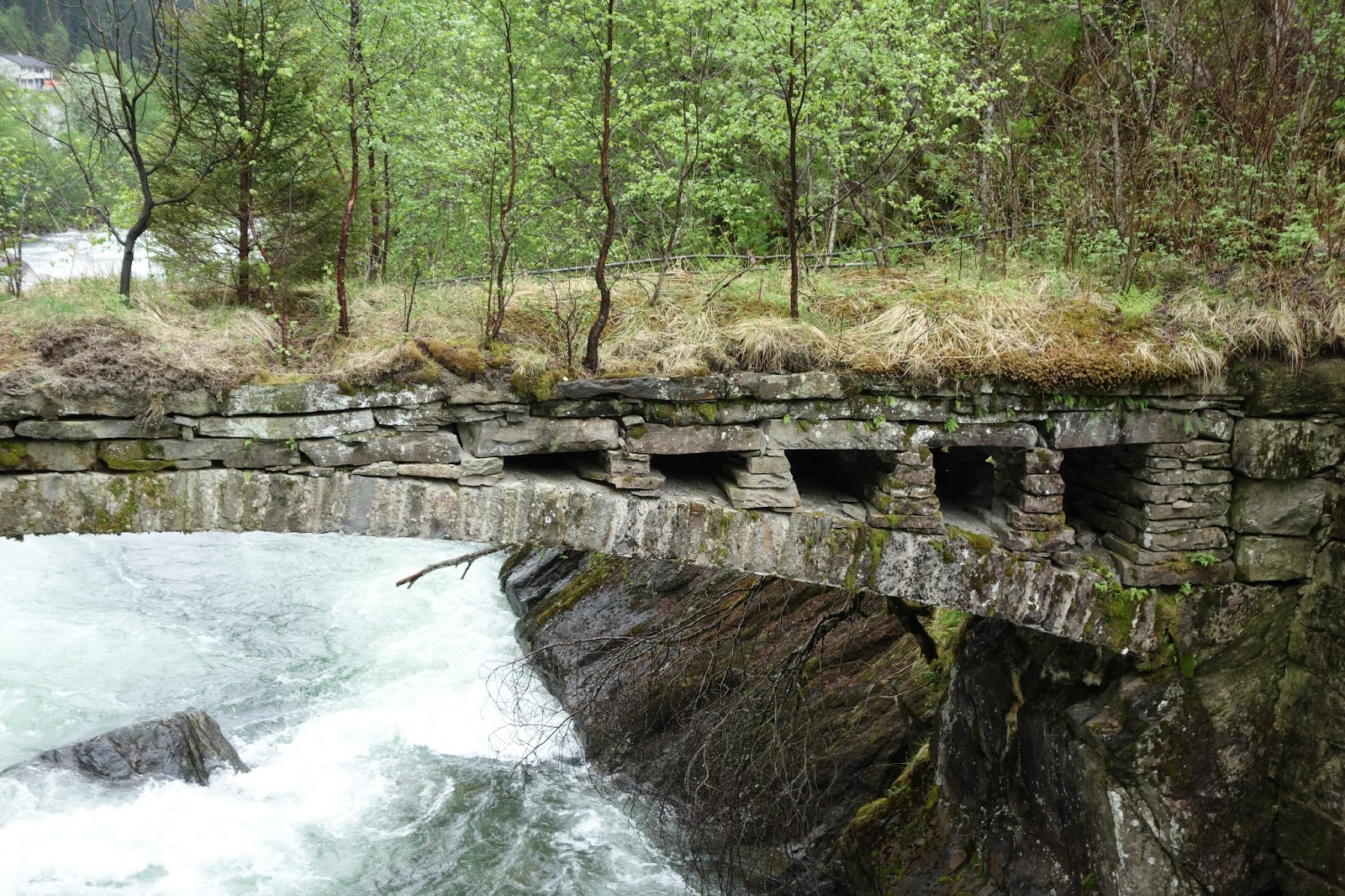 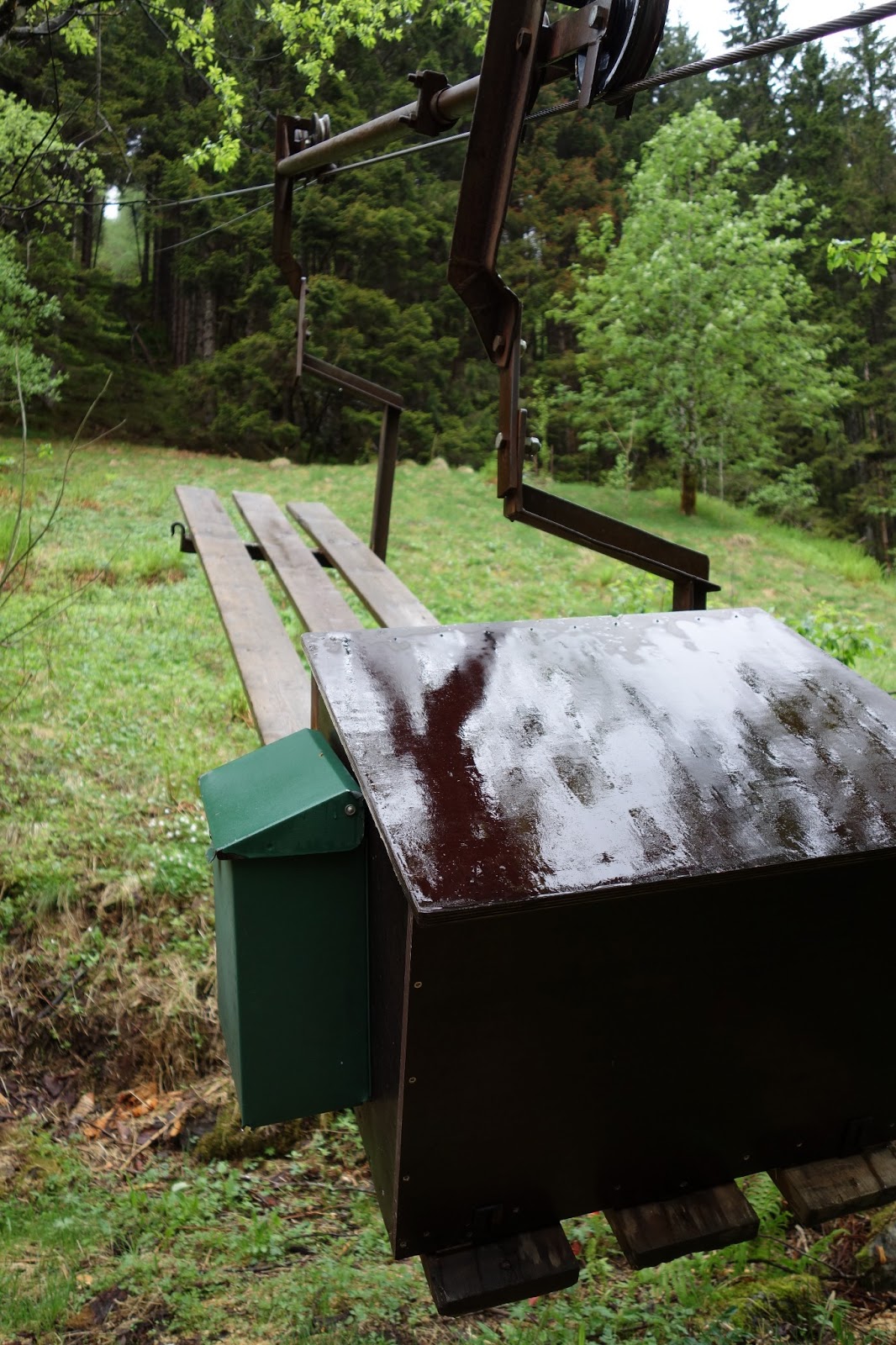 The route takes you over the Nesheimmountain at about 700 metres above sealevel. Which meant I had a nice climbing session ahead of me. Too bad visibility got lousy as I ascended into the mist and fog. 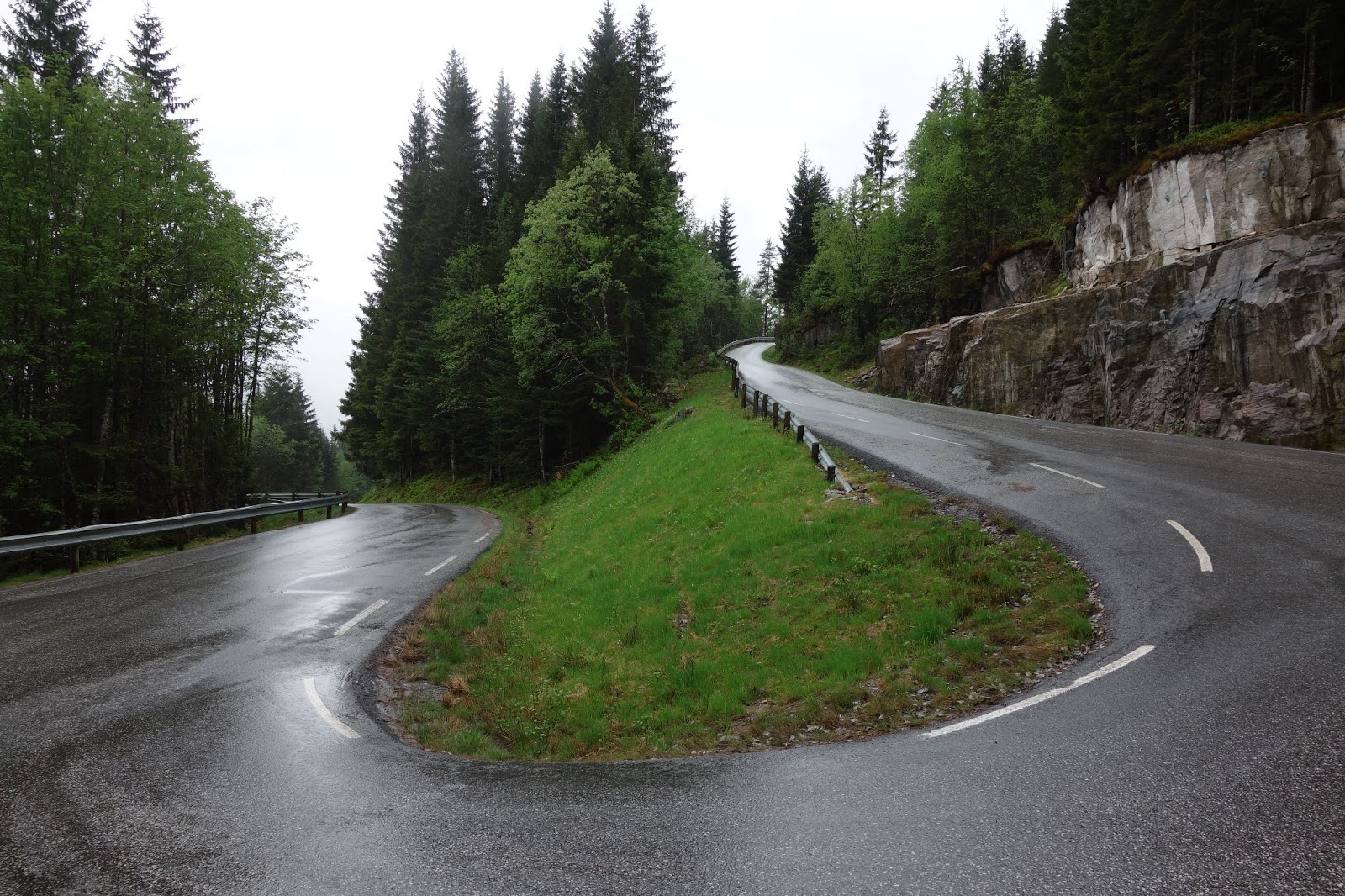 I think the view below is really nice. Maybe next time. There was still snow at the top and fairly chilly conditions, so no long breaks. 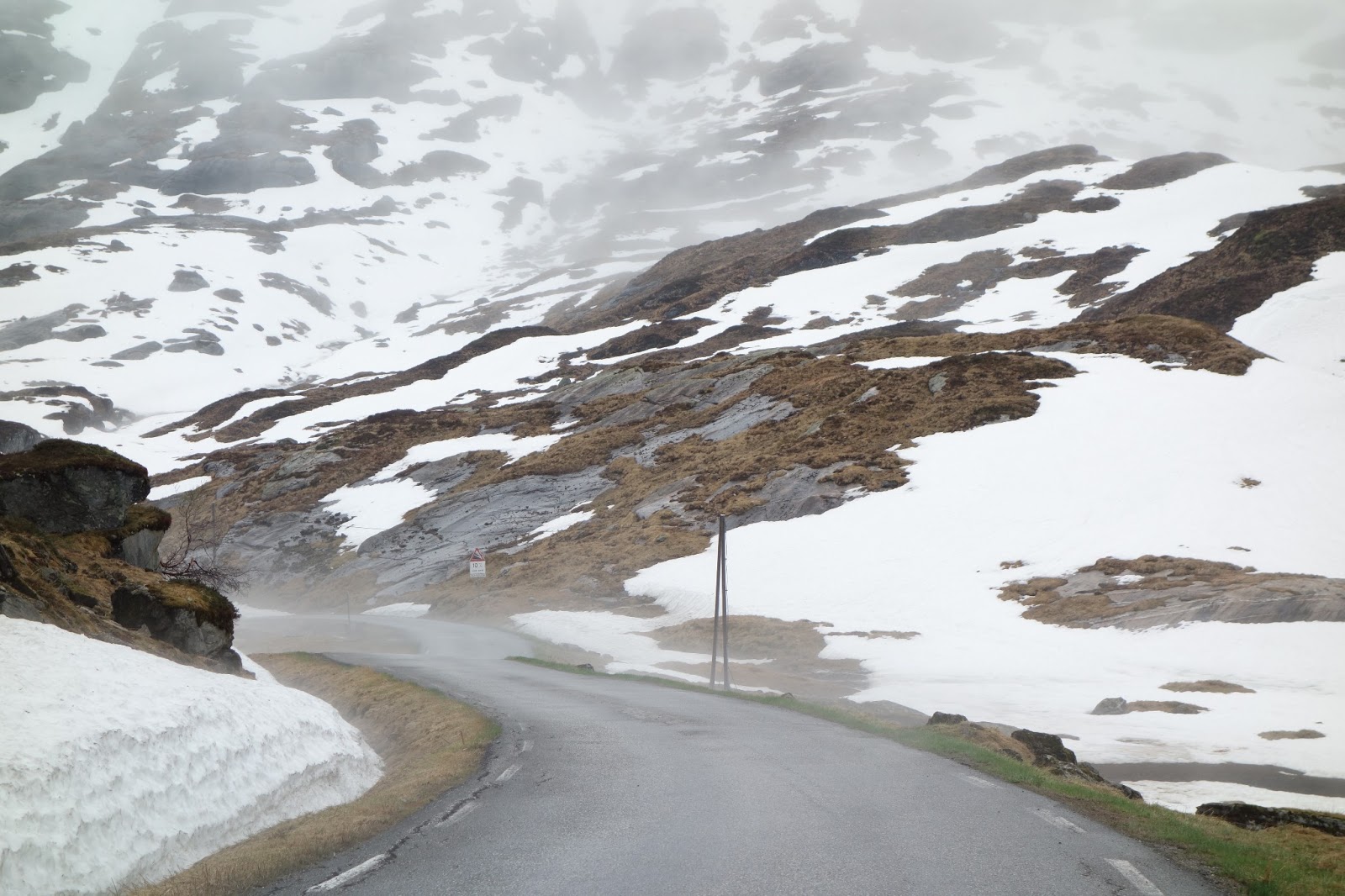 Thankfully, after every climb there is a downhill. Keeping in mind this mornings accident, I took it easy going downhill. 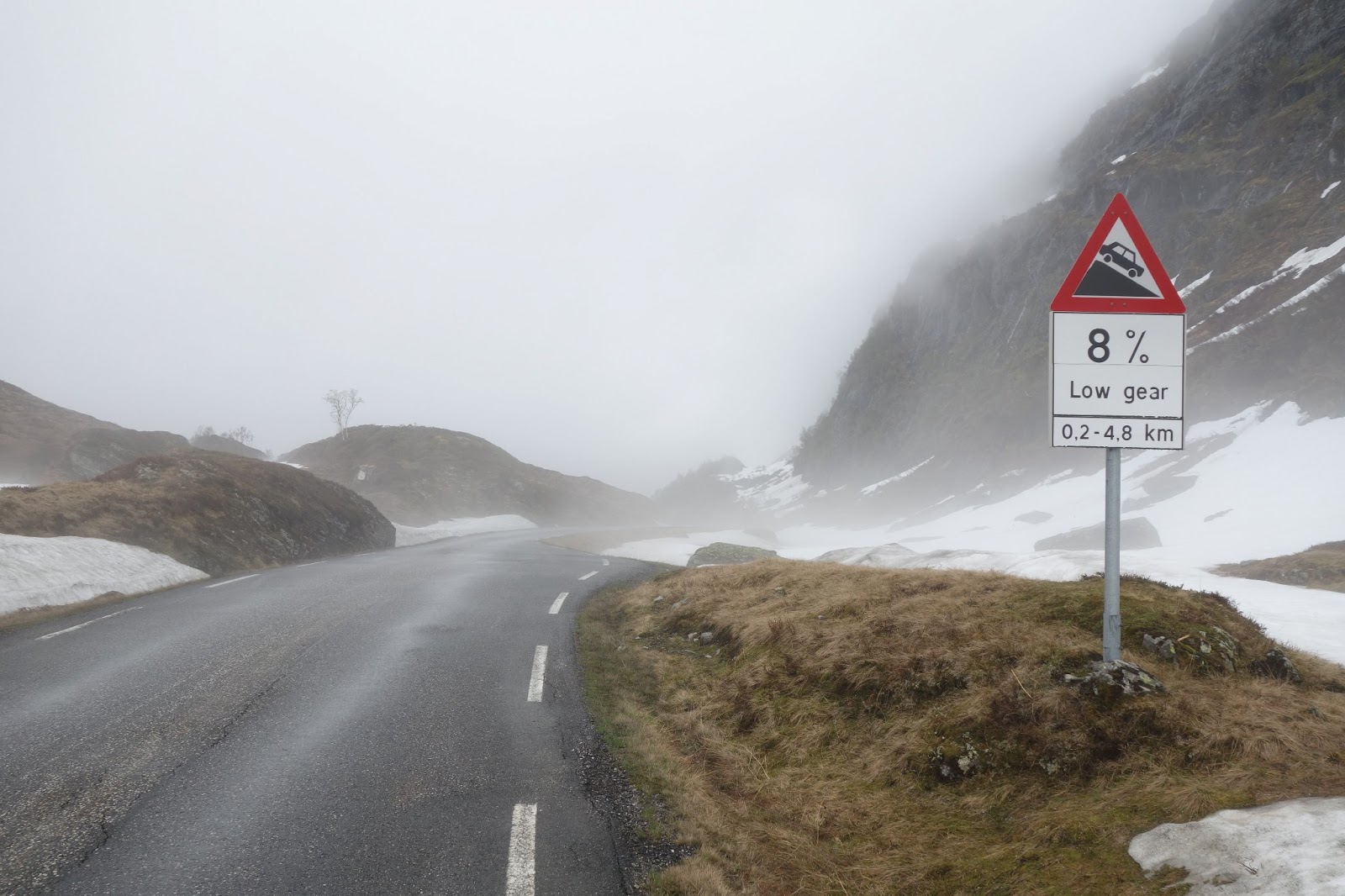 On the other side of the mountain you follow the Teigsdal river, which is well known for its trout population.
http://www.eksingedalen.no/en. The locals cultivate the river and surely next time I will bring my fishing gear. August seems to be the prime time, so maybe later in the summer.


I took my time rolling gently downhill and was impressed by how well kept the houses and farms seemed to be, and it always brings a smile to my face to see newborn lamb bouncing around on wobbly feet. Since I could not find any really nice camping sites up in the valley I decided to go down to the fjord and have a look there.

The road by the fjord also passes through a few tunnels, the first one being totally dark with no lights whatsoever. Interesting experience. I had brought my Petzl Tikka just for this section, but as expected it did not create daylight out of darkness with its meager 40 lumen output. Thankfully there were a few holes in the wall intermittently, giving illumination.


Not long after I found a nice place to camp and pitched my tarp the Glenn Charles way http://thetravelingvagabond.com/ 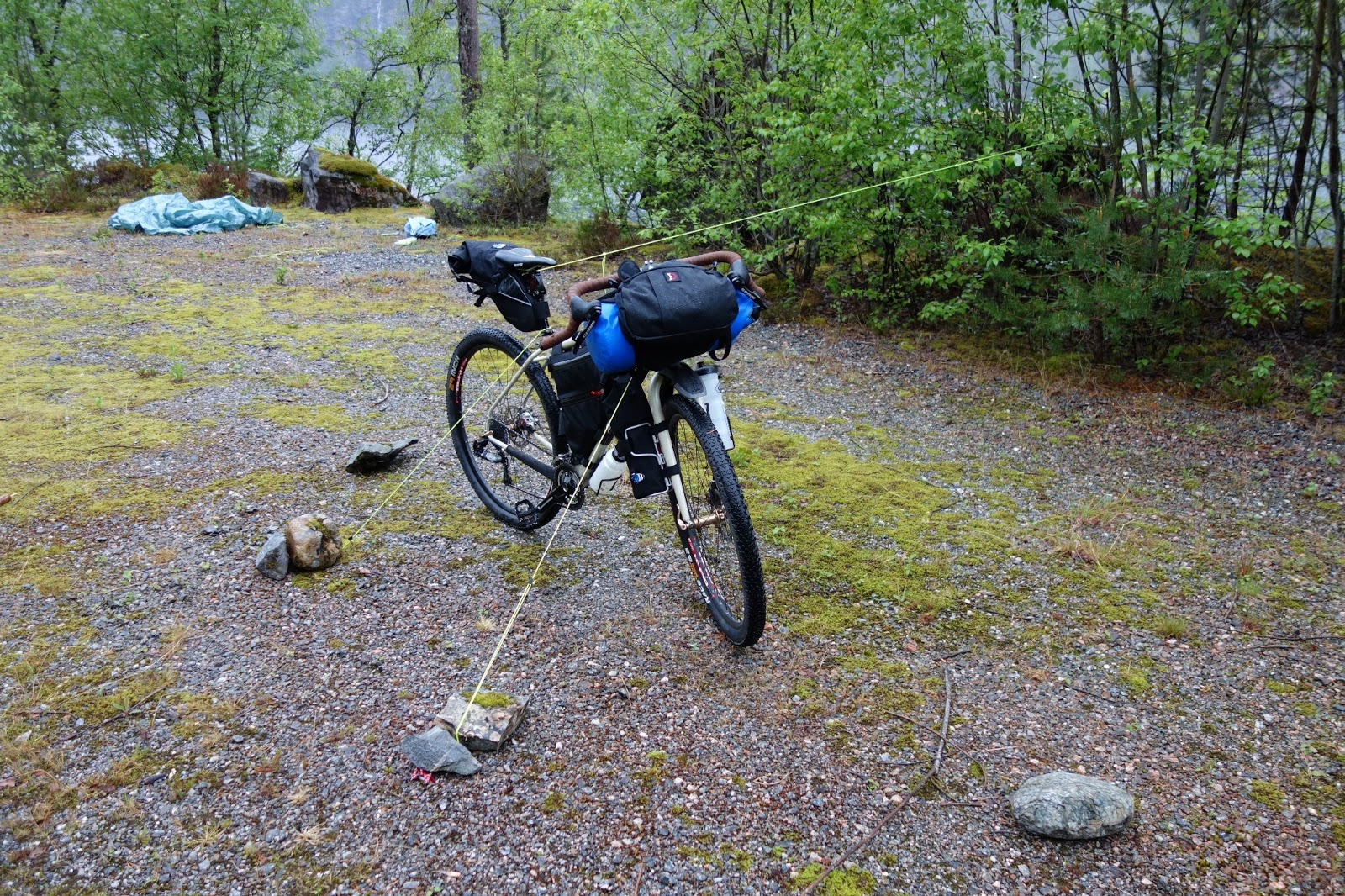 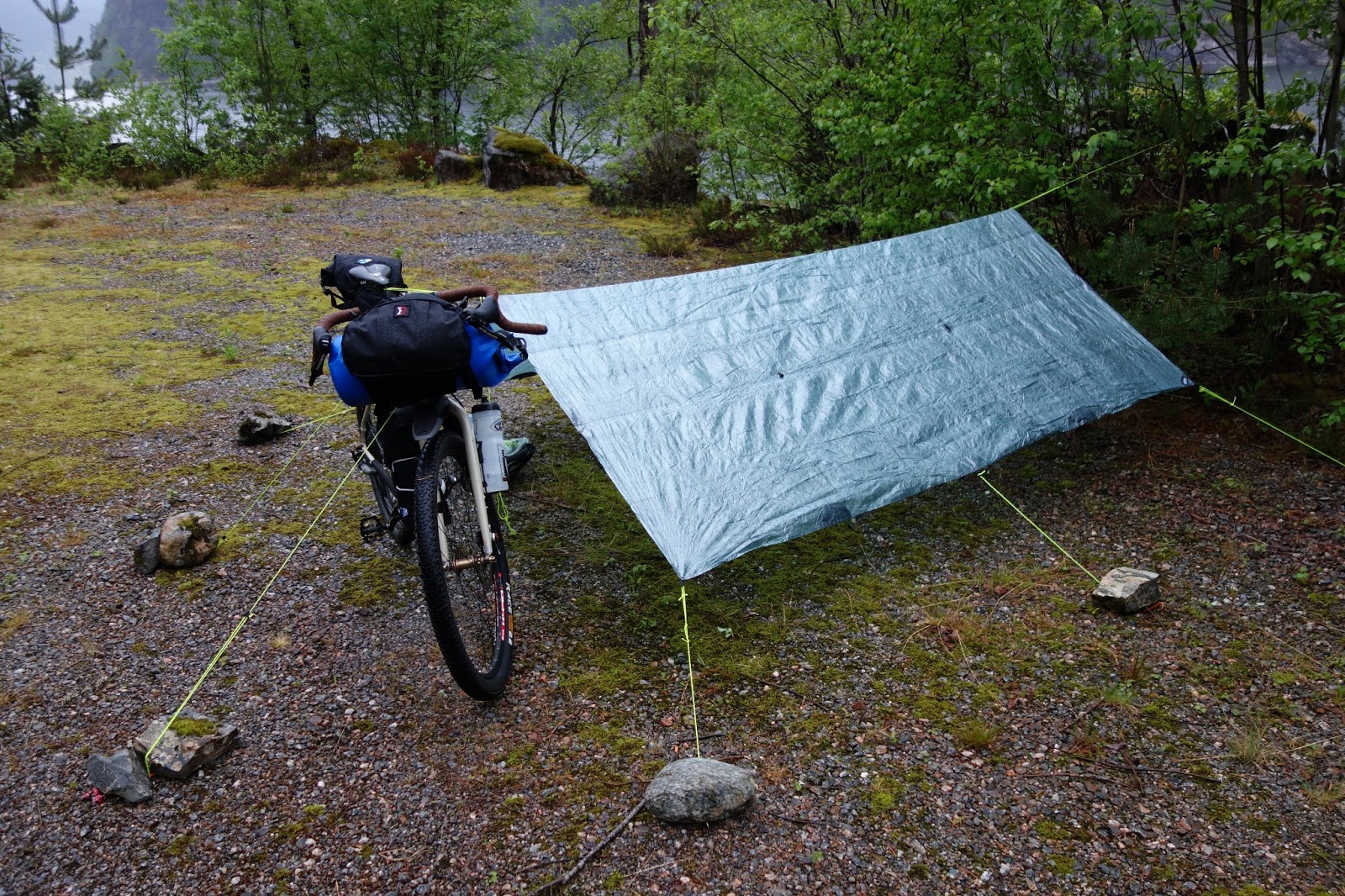 Dinner was eaten and then it started to rain. And it did not stop until the next evening. Seems like most of my bikepacking trips are plagued by shitty weather.. http://thunderinthenight.blogspot.no/2012/10/glued-to-our-groove.html. Ah well, it was only for one night, and it is always nice to practice wet weather techniques.


The next morning I was eager to reach the train that departs from Stanghelle at 11 and took off around 9 am. The weather was, well, wet, but I must say that I thoroughly enjoyed the bikeride along the fjord. Plenty of nice waterfalls, scenery and tourist attactions along the way. I will certainly come back to Skipshelleren with my family. This is a stone age settlement, approximately 7000 years old. http://www.skipshelleren.no/ 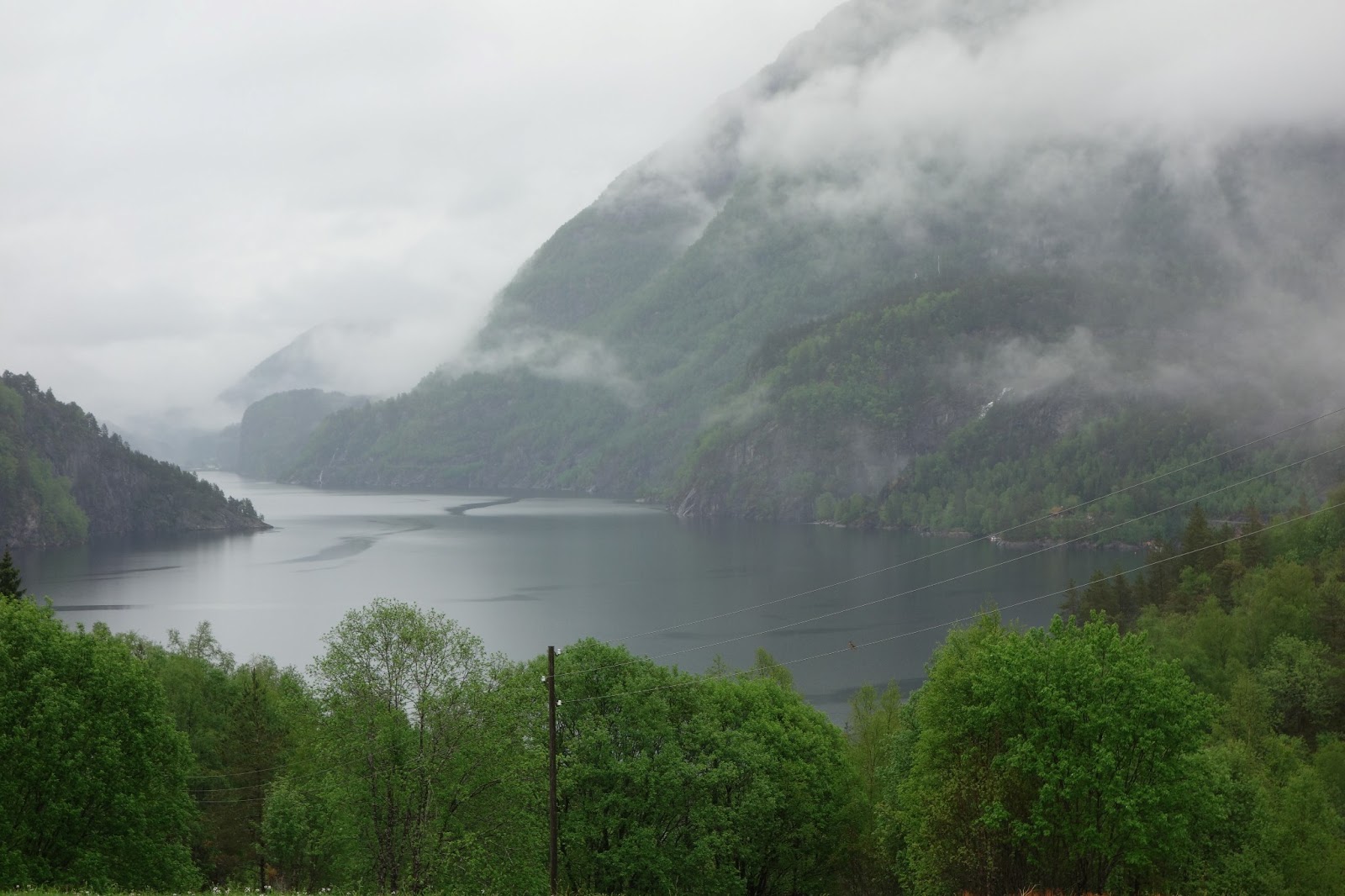 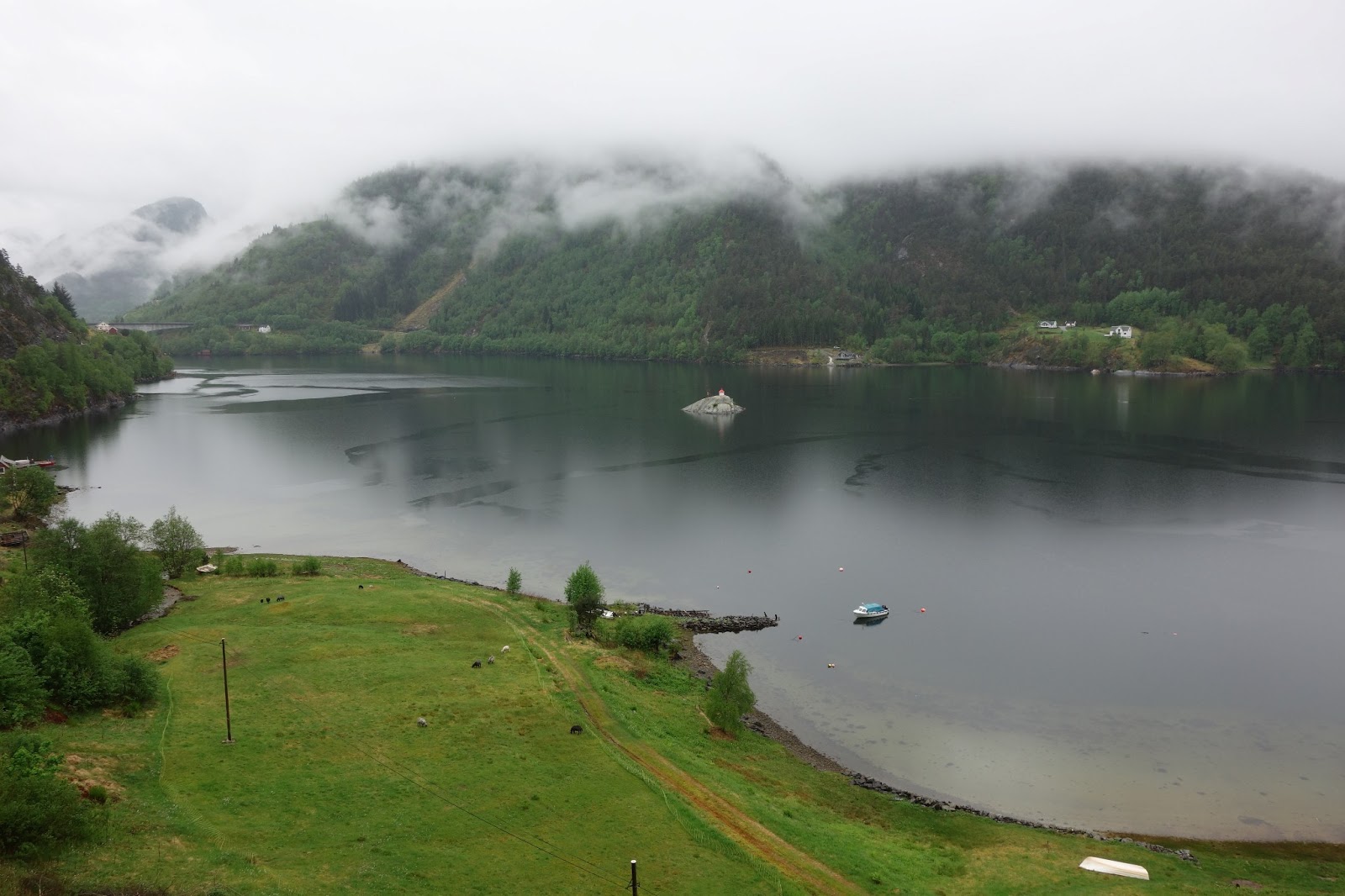 I arrived at Stanghelle with time to spare, and once again made a note to self to do this more often. 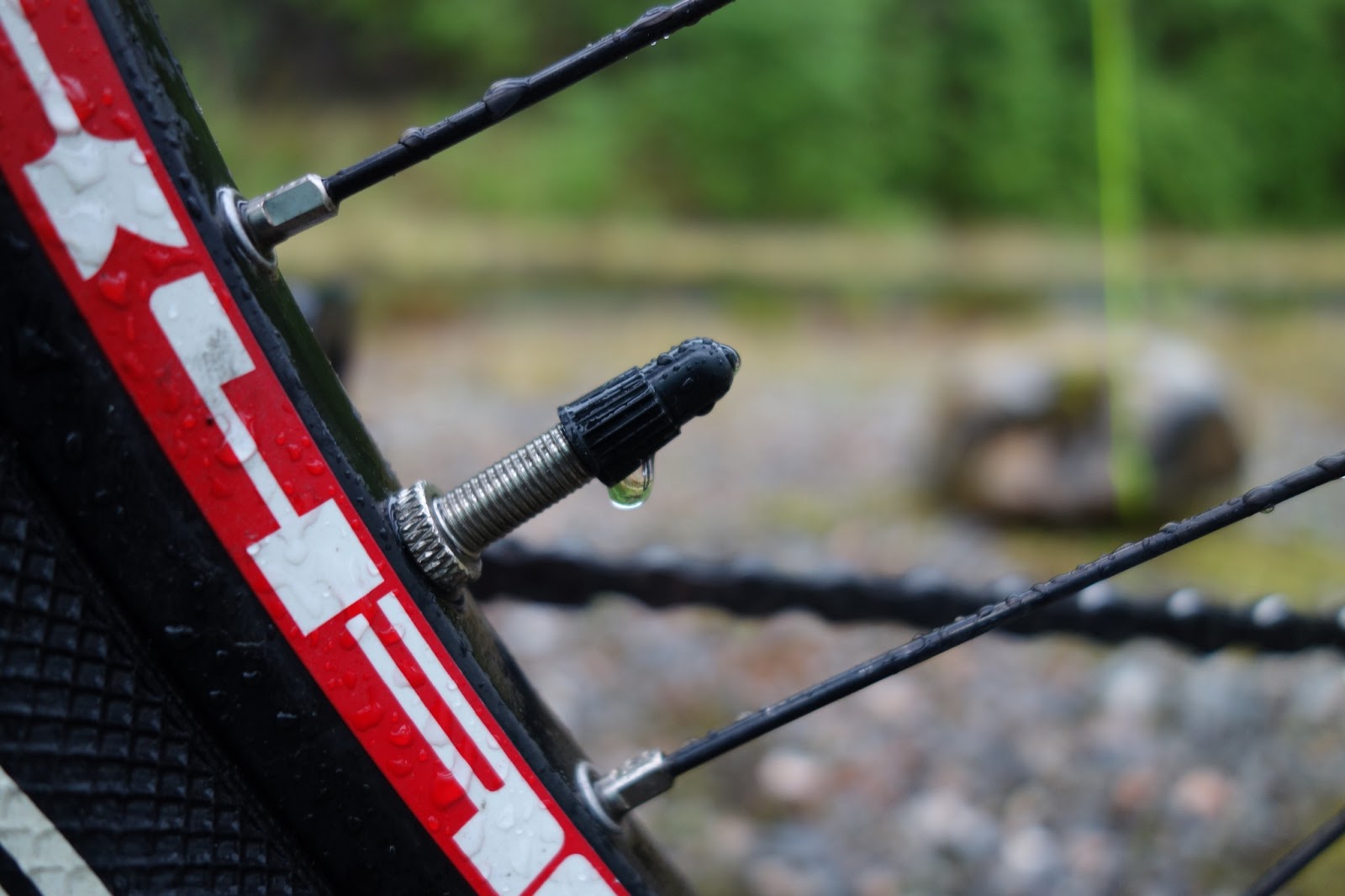 Thanks to M for giving me some time off.

Posted by theOddadventure at 10:02 PM